The troll known as ‘Vernon Demerest’ has in recent years published comments on this website. Site moderators allowed Vernon’s initial moderate comments to be published, in the interests of free speech. And to create a fair and balanced argument pertaining to Victoria Police (VicPol’s) internal police wars.

An interesting anomaly is the IP address utilized by Vernon Demerest, is that it is similar to the IP address of an alleged hacker. The physical location of this IP address is linked to a curious inner city premise, close the heart of Melbourne’s central business district.

It is noted that individuals that utilize a carriage service to menace, harass, or cause offence, carries hefty criminal penalties, within both the state of Victoria and Australia.

It has been revealed in the twittersphere, blogosphere and MSM, that AC Guerin posted “vile”, “homophobic” and “racist” comments on various social media and news websites.

Twitterati commentators have observed that since ‘Vernon Demerest’s’ colourful past has come to light, that “fascist”, “racist”, extreme right wing and generally vile commentary, pertaining to Australian matters of topical interest, have mysteriously vanished from Twitter.

Which leaves the question, just how many alter egos was Brett Guerin running?

Moreover, it is pertinent to question was Brett Guerin managing a secret troll warehouse of colourful commentary from an inner city Melbourne locale, to create community division and social disharmony among various community interest groups?

AC Guerins nocturnal, nom de plume commentary over the past decade or so, has contained sexist, homophobic, bestiality and masochistic themes, focused on rape, sodomy and divisive racist rants.

AC Guerin justified his actions in using a alias to make crude and inappropriate comments by stating;

“I was Christine Nixon’s chief of staff for a while, I saw some of the harm (Paul Mullett) caused to her over a number of years.

It is a matter of public record that former top cop Christine Nixon, dislikes men in positions of power utilizing ridicule to achieve their political objectives.  She stated in her 2016 Supreme Court challenge against Paul Mullett;

A  face off between fomer VicPol Union Secretary Paul Mullett and former top cop Christian Nixon, played out in the Victorian Supreme Court (VSC) around May 2016.  As a consequence of historical actions, the VSC awarded Christine Nixon and her two former police deputies a multi million dollar payout.

Alleged secret deals between the current UFU boss and Victorian Premier Daniel Andrews, VicPol Force Command and IBAC, have been wrecking havoc and innuendo about questionable favours, since the 2016 VSC legal matter was finalized in late August 2016.

How did Brett Guerin’s trolling come to light?

“crap such as this” and a “politically-driven stunt”.

Crude and rude racist comments were made on both Youtube and journalist www.MichaelSmithNews.com website, by Vernon Demerest.  In August 2016 Vernon also  wrote;

[Ms Nixon] had “gutted” Mr Mullett and “stuffed a nice prawn up his filleted asshole”.

Being the good detective that Michael Smith is, he worked with other police to identify the man behind the alias of the mysterious troll Vernon Demerest.

It was always obvious to any casual observer that ‘Vernon Demerest’ was either a senior VicPol or IBAC officer. Due to his in depth knowledge of secretive police operations and internal complaints cases.

“She [Ms Nixon] bent the Mulletmeister [Mr Mullett] over and slipped a rather large schlong up his date courtesy of the Supreme Court’s decision this morning.”

“More importantly, though, how many firefighters knew their union was funding this capricious and doomed-from-the-start private legal escapade with their subscriptions?”
“The Police Association thanks them for funding their former secretary, as they refused to do so. Fireman [sic] are good at putting out fires. But deep thinking, however, is a bit beyond them.”

“tarnished the force’s reputation”, by “portraying the rest of us in a bad way”.

The long running feud between Paul Mullet, Brett Guerin and Graham Ashton stems from a series of controversial events that transpired during the 2006, 2007 and 2008 period.
A mysterious hacker compromised the police email system. An alleged undercover police troll named ‘Kit Walker”, utilized the police servers to defame a former female police union president and colleague of both Christine Nixon and Paul Mullett.
A long running secret investigation involving cafe salt and pepper shakers being bugged, to collect conversations between Paul Mullett and his colleagues, was aired in the former Office of Police Integrity (OPI) hearings.

The OPI hearings were made public, in what resembled attempts to decimate Paul Mullett’s reputation.
The OPI investigation is renown for utilizing mentally incompetent criminal informants to put their names to knowingly false police statements.  Which were then allegedly utilized to grant unlawful phone surveillance warrants. The transcripts from the unlawful phone surveillance activities was later misinterpreted and misused by OPI to destroy Paul Mullett and other parties careers, marriages and reputations.
During this OPI circus, criminal charges against Paul Mullett were not cemented, as former OPI delegate Murray Wilcox was not officially sworn in to office.
It is noteworthy to point out that Graham Ashton was the Executive Director of OPI at the time.

During this tumultuous period OPI stated;

“Police in both their public and private lives shall conduct themselves in a way that instills public confidence in their integrity and engenders respect,”.

The Karmagedon series of corrupt events from 2007, is still festering and this latest VicPol scandal will reopen old wounds.

AC Guernin’s history of colourful online commentary has been referred to the Anti Corruption Commission, IBAC.

It has been observed that IBAC curiously dismissed a formal complaint by former Police Chief Kel Glare, and retired police Inspector Ivan Ray, around May 2017.

The complaint pertained to inappropriate language made by a ‘Vernon Demerest’, on his now deleted Facebook page.

In December 2017 and January 2018 the CAA made various Linked In and Facebook posts revealing their disquiet at IBAC and VicPOl Force Command refusals to investigate complaints of criminal trolling on their social media pages.

Suggestions were made that the Chief of Police Graham Ashton was complicit in Vernon Demerest’s trolling, due to his failure to investigate serious crimes.

Retired police Inspector Ivan Ray, made it clear that the ‘Vernon Demerest’ troll would eventually face criminal prosecution for his alleged offences. 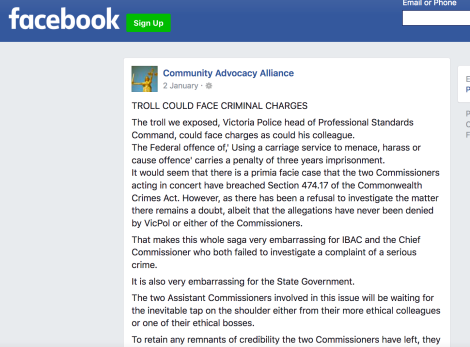 It has recently beend reported that Victoria Police spent around $300,000 defending this legal case. against Mr Benedetti.

It has been noted that a person with the alias of ‘Vernon Demerest’, in 2016, trolled a former police officer, Andrew Coyle on Facebook. Mr Coyle claimed that;

It has been observed that AC Guerin exhibits sexists beliefs, by commenting in social media sites that women should not be allowed to sing Australia’s national anthem. He suggested that only male baritone voices to sing the anthem.

AC Brett Guerin’s alter ego also has been found to have posted disgraceful comments on cricket, rugby, AFL football websites. Again the themes of such commentary were highly sexualized and focused around rape and sodomy.

“Can I preface this by saying this is in no way justifying what I wrote….I guess my default situation is when I see an argument being made that’s not fair I do tend to weigh in and try to provide facts and bring some balance,’’.

AC Guerin further confessed about his vulgar commentary, he admitted that;

Gutter standards in play within elements of VicPol top brass

Members on the Victorian community rightly expect that the head of Professional Services Command (PSC) to be held to higher standards than the rest of the community.

Such vile commentary is so unbecoming for a senior police leader, especially for an Ethics Chief who was in charge of the police integrity and professional standards division.

The failure for VicPol Force Command and the anti corruption commission IBAC to investigate Brett Guerin’s trolling, over a prolonged period of time is plain embarrassing and deeply negligent.

From a prima facie perspective it appears that Brett Guerin has been in breach of his obligations under the Victoria Police Act.

Additionally, it appears that AC Guerin may face criminal charges for multiple actions around breaching a carriage (telecommunications) service, with The Commonwealth Criminal Code and The Crimes Act (Vic).

Former Police Union boss Paul Mullett was reported in the Age as saying about AC Brett Guerins actions;
“It would be in the community and the members’ interest that he be suspended, because on a daily basis he’s delegated with the power to make significant decisions against members of the police force for all forms of alleged behaviour, including this type of alleged behaviour.”

Revelations of the former head of police integrity and Professional Standards Command  PSC) engaging in such debauched activity over a prolonged period of time, highlights the need for an stand alone investigative body, to independently investigate police corruption.

In 2016, the Flemington Kensington Community Legal Centre (FKCLC) and many other CLC’s recommended to the Victorian Parliament, the architecture of a new police accountability framework,

That is culturally, hierarchically and practically independent of police command. They also argued that the complaints body should be transparent, prompt with investigations, victim centred and effective in relation to determining unlawful conduct and referring such matters for criminal prosecution.

Synchronistic activities in play during the VicPol Ethics Chief Scandal

On lighter note, on the day the ‘Vernon Demerest’ scandal was publicized, a deadly brown snake was found withering in the gutters of Spencer Street, near to Victoria Police buildings.

Around the same time a truck carrying fish oil spilled its load onto the highway, causing road closures and a stinking fish stench.

With the Parliamentary Inquiry into the external oversight of police corruption and misconduct in Victoria we note that as a Victorian society, we live in interesting times.
N.B. Captain “Vernon Demerest“, is a fictional character played by Dean Martin in the 1970 disaster movie Airport. The lead character played by Dean Martin was a sexual philanderer in the disaster film genre.