Hot off the press today.  The 5th of October 2012 is officially the Global James Bond Day!  On the October the 5th 1962, the first Bond 007 film was released, Dr No, starring Sean Connery.

The Global James Bond day will showcase The Academy of Motion Pictures, Los Angeles hosting a Music Of Bond evening, The New York Museum of Modern Art screening a Bond film retrospective, and the TIFF in Toronto showcasing 50 Years of James Bond style, in addition to Christie’s in London organizing a live online charity auction event.

Ian Fleming’s thrilling tales of the debonair and charming British spy – James Bond, is the longest run film franchise in the history of cinematic entertainment. The iconic James Bond films are renown for their visual imagery and sounds.

One of the most distinctive trade marks in cinematic history, is the James Bond opening title which depicts a gun shooting down a barrel with blood splashing down the screen. Well respected visual designer Maurice Binder created the most recognizable visual icon in the world – the opening graphic device of the James Bond 007 films.  In this title sequence the viewer looks down the barrel of a gun at James Bond 007 shooting at his target, with blood flowing across the frame, a visual device teamed with the James Bond Theme sound track.

James Bond 007’s cements his status as a debonair and charming gentleman in every 007 film, resplendent in his tuxedo and well-tailored suits, designer watches, technological gadgetry and phallic sports cars.

Daniel Craig as James Bond in the Skyfall movie

Daniel Craig stars in the 23rd Bond film Skyfall as the legendary secret British agent Bond, whose espionage adventures see him traversing across the far east, sailing the seven seas, engaging in dynamic adventures underground, in the subway and undersea.

The film is directed by Sam Mendes and produced by Michael G. Wilson and Barbara Broccoli.  MGM and Columbia Pictures are distributing the Skyfall film.

British singer Adele headlines a 007 tribute, singing the Skyfall theme song which is available to listen to here:

Daniel Craig as James Bond in the Movie Skyfall.

Clever product placement is strategically deployed in the Skyfall Bond movie.  In addition to a well-timed collapse of two house of cards, placed to correspond with the fall of the evil empire of Bond’s nemesis.

It will almost be guaranteed that in the new Skyfall film Bond will utilize his wit and charm as a weapon of choice to seduce a bevy of attractive woman.

Who in your opinion is the sexiest James Bond actor to play the legendary 007 spy agent? 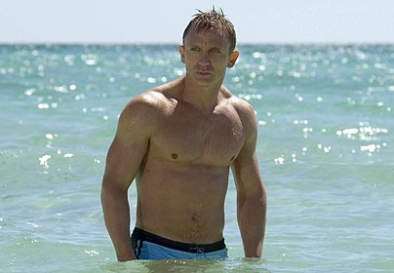